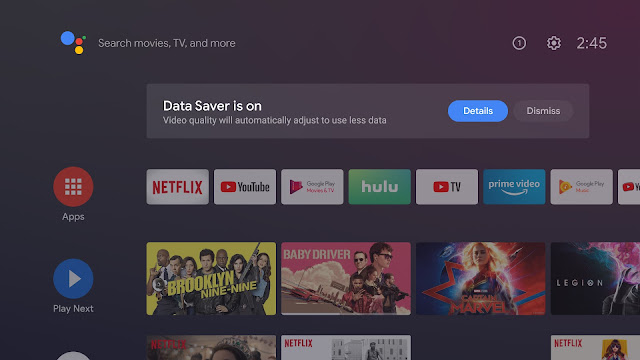 Android TV Data Saver is the official app that Google has created to save data on Android TV when using the mobile as a hotspot.

Most of the people who use Android TV in Spain have WiFi available to enjoy their favorite content. Not everyone has this possibility and there are some who use their mobile as a hotspot in order to reproduce these contents, with the consequent consumption of mobile data. Luckily, Google launches an app with which to solve this problem.

Android TV Data Saver is the name of this application, which has already made its entry into the Google Play Store . It is an application created by Google, which seeks that users will be able to save mobile data while watching content or playing games on their device with Android TV

Save mobile data on Android TV

Google initially launched this application in India last year, for those users with Android TV who do not have WiFi at home and connect their Smart TV to a mobile point. The company now launches this application in a general way for users, because it can be downloaded from the Play Store in any country. This way it will be possible to save data with the app.

This application is presented as a solution for a large number of users. Its operation is similar to the basic mode of Google Chrome . When using the app, media players are instructed to stream at lower bit rates and / or resolution to save as much data as possible. This makes it easier to remove buffering on slower connections, serving HD content to more users. In addition to compressing, the application can also issue notifications with the use of data, to avoid consuming the rate in its entirety or having to pay more than it should.

Considering that many manufacturers release Android TV devices around the world, the app can be a very helpful tool. Mobile data can be saved with little effort , without thereby obtaining a worse experience when playing or playing series and videos.

The application has already been officially launched in the Play Store , where it can be downloaded for free. These past few days it seemed to continue to suffer some restrictions depending on the country, but it seems that users will now be able to download it, regardless of their country of residence.