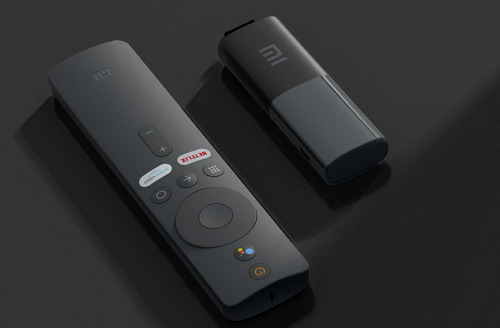 Smart TVs market has amazingly evolved and the race between manufactures has become harsher than ever for the purpose of offering the best experience possible to customers at relatively affordable prices. Some of them have opted for their own OS like Samsung Tizenwhich often times offers limited experience in terms of good quality apps. On the other hand, a large part of TV fans don’t seem inclined to replace their ordinary non-connected TVs for several reasons and still they want to access streaming services.

There are several devices that allow us to turn any screen into a smart TV. Google’s Chromecast or Amazon’s Fire TV Stick are some of the most popular options, although of course there are many others based on Android TV on the market. Today we want to talk to you about one of the most anticipated options by users. We tell you our experience and everything you need to know about the Xiaomi Mi TV Stick .

What can you do with the Mi TV Stick?

If you don’t have a Smart TV or if your TV is using an obsolete OS… There are currently many options on the market to connect your TV. There is the Apple TV, in Full HD or 4K, the Amazon Fire TV options and many boxes under Android TV. Xiaomi also has the Mi Box S and there is also the Chromecast with Google TV… and recently the Mi TV Stick.

So Xiaomi now offers two products. The 4K compatible Mi Box S launched a while ago but still a decent option, and the Mi TV Stick. An HDMI dongle that we had the opportunity to test.

Thanks to all those functionalities and Android TV as the operating system, This Xiaomi device has been, as we told you, one of the most anticipated by many users who want to give their old TV a second life. But before we start talking about these, let’s see what is included in its box. 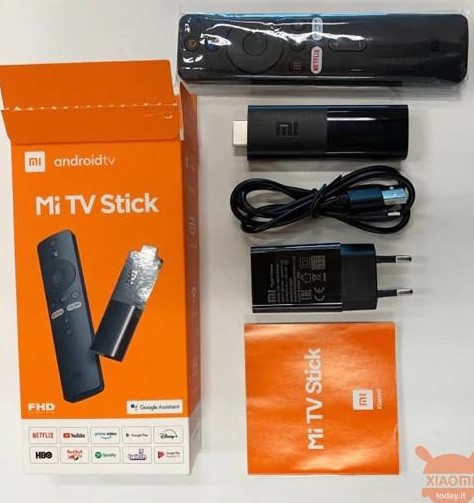 Packaging : it is interesting to talk about the packaging on this device since, as you may be realizing, it looks a lot like the Amazon Fire TV Stick. And this is not the only similarity that both accessories have, although we will leave the comparisons for another article.

Instructions : the typical “booklets” of options and features that include every electronic device.

Power cord and connector : The power source that will power the device to run. Something curious is that in this case no HDMI extension cable is included for users who have little space between the TV and
the wall. Something that is not too serious but that you should take into account.

Remote control: a controller very similar to other Android TV-based equipment. It has the typical crosshead to move through the system interface, the volume control buttons, two dedicated to quickly access Netflix or Prime Video and one to interact with the assistant from the command itself.

Mi TV Stick : This is a small stick with half the body in matte black and the other half in black with a glossy finish. It has the HDMI connector to place it on the television and a microUSB port that will only serve to power it.

As we have already been telling you from the beginning of the analysis, the functions that this accessory has are the same as those of any other device with the Android TV operating system. A gadget that when we connect it to the screen, we turn any television into a Smart TV . Therefore, among many other functions, we will be able to:

Afterwards, everything is done in a very simple and intuitive way, just let the setup wizard guide you through. Determine the desired language, link our mobile phones and various settings.

After accessing the main menu, you will see that the interface is quite pleasant , simple and WITHOUT ADVERTISING, a very important detail.

The Xiaomi Mi TVStick is a TV box in the form of an HDMI key that allows you to use Android TV on any screen or TV with an HDMI port. Thanks to its supplied remote control, it allows access to a visual interface to install applications and navigate on the interface while taking advantage of Chromecast functionalities. It can display a full HD image up to 60 frames per second.

With Android TV and a good remote control, Xiaomi’s Mi TV Stick is one of the best streaming devices regarding price-performance ratio. What is it really worth? We tested it for a while and this is what we think of it.

With a design reminiscent of Amazon’s Fire TV Stick, the Xiaomi Mi TV Stick connects to your TV’s HDMI, powered by USB. It has 8 GB of internal storage (eMMC) for downloading applications and games, and 1 GB of RAM. It runs on Android TV 9, with built-in Chromecast to stream content from a mobile device. 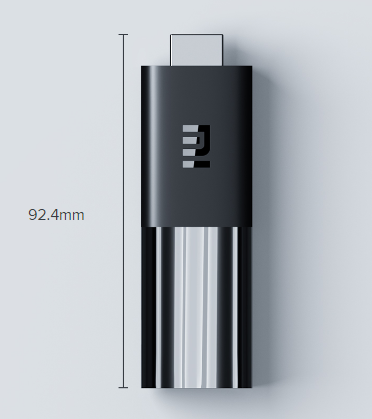 This device consumes almost nothing: 0.6 Watt when it is in standby and between 1.5 W and 5.4 W in operation. Theoretically, many TVs will be able to power the dongle without any problem via a USB port. 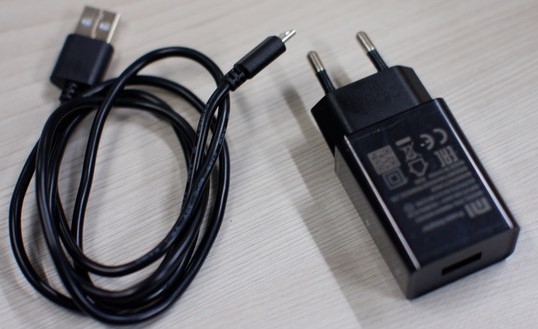 The whole can make you think of the popular and traditional Chromecast. But make no mistake, it’s much more complete: this little device offers an Android TV experience with a user interface that allows you to stream content directly instead of systematically using your phone. Android TV offers a wide variety of applications, including the most popular (Netflix, Prime Video, Disney+, YouTube, Twitch, HBO MAX…), and it also includes a cast function. This means that it works in the same way as a classic Chromecast if you want to broadcast content from your phone.

As far as performance is concerned, the Mi TV Stick is powered by an ARM Amlogic S905 chipset with four Cortex A53 cores with a Mali-450 MP3 GPU, combined with 1 GB RAM and 8 GB storage. The dongle has Wi-Fi 5 and Bluetooth 4.2 connectivity.

This processor is the same as the one that equips the Mi Box S… only less RAM is available (1 GB instead of 2). However, by limiting the Mi TV Stick to Full HD (1080p) definition at 60 IPS, Xiaomi has eliminated the problem that was affecting the Mi Box S. Indeed, the interface is relatively fluid whereas it was one of our criticisms regarding the Mi Box S. However, in some applications, such as Disney+, we have noticed slowdowns. This is not the case, for example, with the Netflix application. As far as games are concerned, it’s really not a device suitable for this use. The SoC is really too limited for this use.

Finally note also that this SoC, engraved in 28 nm, has a low power consumption, but it is not very efficient. It will therefore heat up quite quickly. Nothing serious, but we quickly see the limits of a compact design with an entry-level processor.

Xiaomi has combined this dongle with the same remote control as the 4K compatible Mi Box S (it requires 2 AAA batteries), and that’s a good thing. The remote control has a button to access Google Assistant (microphone integrated to the remote control), a D-pad for navigation, back, home and menu buttons, volume controls and dedicated buttons to launch Netflix and Prime Video.

My TV Stick, a relevant solution with limitations

Full HD limited: as mentioned above, this box is limited to Full HD (1080p) definition. If you have a 4K TV, it would be a shame to invest in this product when you can find 4K compatible alternatives for almost the same price.

Lacking many standards: the Mi TV Stick does not support many standards, including Dolby Vision, HDR10+… if you have the hardware to take advantage of these technologies, it would be a shame to be blocked by the Mi TV Stick. However, note the Dolby Audio 5.0 and DTS 2.0 audio support.

No storage extension:  the microUSB port is not OTG. So you won’t be able to connect a USB key, a hard disk, a keyboard or a mouse to it. For navigation devices, you will have to go through Bluetooth, and for external storage… through remote solutions (cloud, LAN, etc.).

Poor RAM: There’s just 1GB of RAM on the Mi TV Stick compared to 2GB on the Mi Box 4K, and this did make a difference in functionality. The device was a bit sluggish when loading apps and even getting around the interface wasn’t very quick.

Forget about gaming: With games with a lot of graphical load , we find the experience not very satisfactory. In the first place because we have to handle it with the crosshead of the remote control itself, which is not exactly too comfortable. It is true that through the settings you can connect Bluetooth devices such as gamepads and that can improve the handling a bit, but that single gig of RAM does not seem enough to give a fluid experience in this case.

Do we recommend buying a Xiaomi Mi TV Stick?

The Xiaomi Mi TVStick – thanks to . its low cost, its simplicity, its comfort to take it wherever we want, the wide repertoire of apps that we can access … is a very good option to make our old-fashioned television a Smart TV to be able to enjoy all the content on the web.

Limitations will be its performance (no 4K, no Dolby Vision, no HDR10+). Nevertheless, the interface is relatively fluid and the supplied remote control does its job very well. If you want a TV box for gaming or advanced uses, forget the Mi TV Stick which will be too limited by its performance.

Well, if you intend to use it to watch series or movies on an old television, it can undoubtedly be an interesting option to consider if you find it on sale.

But, if what you are looking for is something more powerful mainly for gaming, you can take a look at the Mi Box S : another device also from Xiaomi that has twice the RAM, a more powerful processor, 4K resolution and In addition, it has USB ports with which you can perform many more functions.