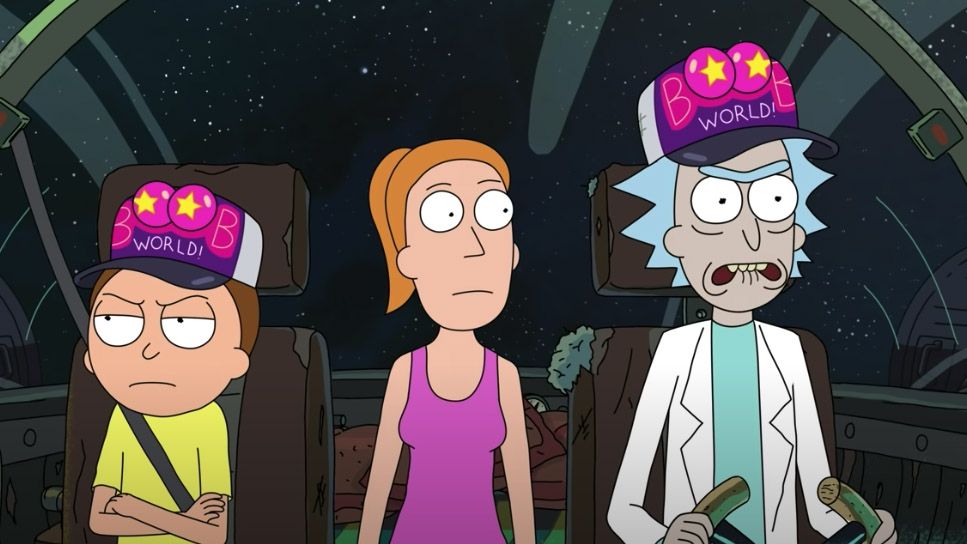 If this week’s Rick and Morty proves anything, it’s that mashing together several different parodies is not a surefire way to success. ‘Gotron Jerrysis Rickvangelion’ tries to mix the anime world of Voltron with… Scarface? It’s an odd combination that yields varying levels of success, and not Rick and Morty’s smartest parody to date.

The adventure begins with Rick, Morty, and Summer headed to Boob World, which marks another case of Rick enabling Morty’s unchecked perverted obsessions. However, that trip is quickly canceled and interrupted by the discovery of the last Gotron Ferret Rick needs to finish his giant robot collection – this will allow him to form the infamous Gotron itself.

It’s here that the episode dives into one of Rick’s obsessions, and his inability to control how far he is willing to go with them.

The episode isn’t much for laughs, which is a shame, because Rick, Morty, and Summer episodes are usually so well done. The episodes that feature the three of them together all have a similar formula: Summer is usually brought along for some kind of trivial reason, making her a third-string for the adventure. The situation eventually gets out of hand, and is made worse by Summer’s need to enable Rick in order to get closer to her grandfather – that’s because she’s persistently jealous of his and Morty’s relationship.

‘Gotron Jerrysis Rickvangelion’ follows the same pattern, but that isn’t the problem with the episode. It’s the parodies themselves that don’t work.

Perhaps if the episode just focused on making fun of Voltron and giant robots, maybe we could have more fun with the results. The beginning of this episode is actually good for a few laughs, with Summer giving a pretty succinct argument for why the rest of the family should join the three of them in operating giant robot ferrets. I mean, who doesn’t like giant fighting robots?

There are even a few good sight gags, with everyone entering their robots from different locations only to regroup from where they started. The focus of the episode shifts when the Scarface/Godfather-style plot begins to creep in.

This just doesn’t fit, and the episode’s comedic focus spirals out of control. Normally, Rick and Morty episodes have a compelling sense of “What the hell am I watching?” that draws you in and makes you watch out of morbid curiosity. This time, though, the plot falls into this weird “Where is this going?” space that just doesn’t entertain as much as you want it to.

This mob story plot is also pretty predictable. Rick’s obsession escalates, as he makes his Gotron bigger for no other reason then he wants to. Along the way, he gets more and more more out of control, casting aside his family and making enemies that threaten to tear the whole thing down.

The show attempts to make fun of anime characters and ideas in the process, but this doesn’t land at all. The introduction of the Gotron pilots plays in old and tired anime tropes that just don’t exist anymore. Over-exaggerated anime characters and bad dubs just aren’t as funny as they used to be.

When Rick eventually casts Summer aside, he’s drunk with power and the family has to save him – with the return of the ‘Giant Incest Baby’ from this season’s ‘Rickdependence Spray‘ episode. It’s weird and uncomfortable as we get a strange backstory about how Summer bonded with the family’s gigantic mistake (side note: ‘Giant Incest Baby’ is something I’ve had to type far more times than I would have liked).

The whole scenario of Rick realizing he’s wrong isn’t as funny as the moments where he owns his mistakes and just does not give a damn about how he fixes them.

Sometimes, Rick and Morty bites off more than it can chew, even with one focused plot. I wanted to like this episode because, once again, who doesn’t love giant robots? ‘Gotron Jerrysis Rickvangelion’ isn’t as funny as it should be, though, which is ultimately the barometer of success for Rick and Morty when it comes to taking a big swing on a pop culture parody.

Rick and Morty season 5 airs every Sunday on Adult Swim in the US, and on Mondays on E4 in the UK and Netflix in Australia.