HP has put out what I can best describe as a Surface Pro X with a Spectre Folio form factor. The Elite Folio is a lightweight, leather-covered, convertible Windows laptop powered by a Snapdragon processor with Arm architecture. It’s a neat-looking, futuristic system that’s meant to be used on the go, rather than for intensive tasks.

I often view products like this as the ideal secondary device — something to bring to a conference, or to run Netflix on at night. But with a starting price of $1,629.73, the Elite Folio is priced like a primary work driver.

Arm for Windows has certainly improved since we first reviewed the Surface Pro X in 2019. App compatibility is no longer the complete disaster it was then. Still, purchasing this device is compromising on performance and may be compromising on software options, depending on the apps you’re using. Some people are certainly well-suited to the Elite Folio, but if you think you’re in that group, just make sure you know what you’re getting into. 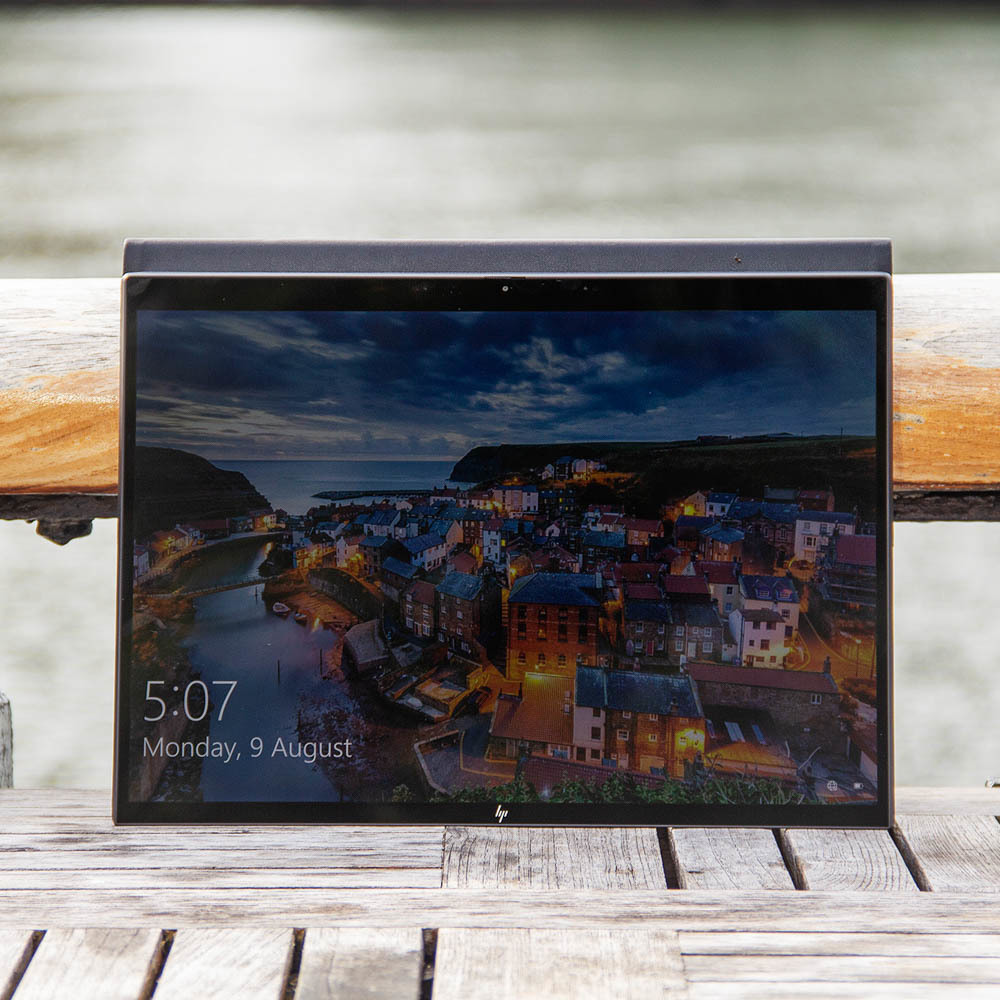 The primary reason the Elite Folio is able to command that premium price tag is its design. The entire chassis is wrapped in leather (vegan leather, per HP, so technically polyurethane), which will make you look like you’re carrying around a fancy notebook. It’s 2.9 pounds, but it feels lighter than it is to me, maybe because the leather cover makes it so comfortable to carry. The keyboard deck is a dark onyx color (matching the leather cover) with a nice, smooth texture; it’s not a fingerprint magnet, which black computers (even at this price point) often are. An included stylus lives in a silo below the chin, which charges when it’s not in use.

But the most unique feature is the form factor. The Folio is a convertible laptop, but you have more than the usual tent, tablet, and clamshell options. You can also pull the screen over the keyboard and rest it in the middle of the deck (either above or below the touchpad), creating a sturdy easel for note-taking or drawing. (I ended up using this formation a lot when I was writing or drawing with the stylus, because the Folio’s hinge isn’t super sturdy, and there’s noticeable wobble when you touch the screen in clamshell mode.) There aren’t a ton of laptops with this sort of form factor, especially outside the creativity space. The last one I reviewed was Acer’s ConceptD Ezel, a hulking 5.6-pound affair with a GPU inside. HP has used the design before, of course, with its 2019 Spectre Folio that the Elite Folio succeeds, but HP isn’t selling that anymore.

The Folio’s screen is smooth to move, and I was never worried about it sliding around. Pulling it over the keyboard does take a firm tug, and it’s a bit difficult to do without touching the screen in the process and potentially messing up my tabs. I think this is the first laptop I’ve ever reviewed that I wish had slightly larger bezels.

In addition to the form factor, the Folio’s audio makes it a decent videoconferencing machine. The four-speaker array, including upward-firing grills on either side of the keyboard, delivers clear, excellent sound with strong vocals and even audible bass — a rarity on laptops of this size. There’s one catch, which is that there was a bit of audible distortion around some high treble tones (like when Olivia Rodrigo sings the words “deja vu” in the beginning of “Deja Vu”) that I couldn’t totally eliminate without bumping the volume significantly down. I’ve asked HP about this issue.

The HD camera, on the other hand, is standard mediocre laptop fare, delivering a grainy and somewhat dark picture even in a bright office setting. It does check various useful boxes, though: it supports Windows Hello (which didn’t give me any trouble) and has a physical privacy shutter that’s pretty easy to snap back and forth.

Inside, the Elite Folio is running Qualcomm’s Snapdragon 8cx Gen 2, an Arm chip that’s common to see in lightweight Windows convertibles (including some versions of Samsung’s Galaxy Book S). It supports 5G and 4G LTE (one of the main benefits of an Arm machine), with an X55 modem. Wi-Fi 6 is on board as well.

I remember trying out the first Surface Pro X in 2019, when Windows on Arm was painfully slow. (It’s not an apples-to-apples comparison since the Surface Pro uses Microsoft’s custom Qualcomm chips, but there aren’t too many Arm-based Windows devices at this price point for comparison.)

The Elite Folio’s performance is night and day. (And it’s running Windows 10 Pro, not Windows 10 Home.) The device boots instantly when you open it up, and Windows Hello facial recognition takes less than a tenth of a second to sign you in. And while all kinds of apps were either unavailable or unusable on the first Surface Pro X, most of what I needed worked just fine here. (Keyword being most — more on that in a second.) For those unfamiliar, Windows apps that are compiled to x86 (the architecture Intel uses) need to be run through an emulation layer to be usable on Arm devices. The Folio can currently run 32-bit apps (though your mileage may vary), but 64-bit emulation is currently only available through the Windows Insider beta testing program.

Spotify, which has been sluggish on Arm in the past, had no problems here. It even ran more smoothly than I’ve seen it do on some recent Windows laptops. I had no problem downloading and running various web-conferencing apps like Zoom, Slack, or Microsoft teams either. Some apps were available but not the best experience. Lightroom and Photoshop, for example, could both be downloaded but were stuttery as I scrolled through various functions. That would’ve been a pain if I were using those apps day in and day out. The software we usually use to calibrate screens could also be downloaded but never recognized my colorimeter once I got it up and running.

And some programs aren’t available at all. Dropbox is a no go — you’ll have to settle for the S-Mode version in the Windows store, a bare-bones app that doesn’t allow you to save files to Dropbox directly. You can download Steam, but a bunch of games aren’t there. I got CS:GO but couldn’t get Cyberpunk 2077, Red Dead Redemption 2, or Horizon Zero Dawn. But the main disappointment for me was the slim Adobe offerings. I could only access Photoshop, Lightroom, and Acrobat DC from the Creative Cloud desktop app; no Premiere Pro, no Audition, no InDesign, no Illustrator, etc. Plenty of people don’t need those apps, of course, but it’s still a shame since the Folio’s form factor could make it an appealing device for editing on the go.

There’s no way I could test every possible app on this device, so the takeaway here is: do some research and make sure that the programs you use are available. Call the companies if you have to. I’d really hate for someone to spend $1,700 on this product only to find out that an app they need won’t work on it.

When it comes to general office use (mostly in Chrome, in my case), the Folio was functional but certainly a step-down from the best similarly priced Intel and AMD laptops. I used it to jump between around a dozen Chrome tabs and a couple apps, and there was just a bit more lag than I was used to. Text took a smidge longer to catch up with my typing in Google Docs, Slack took a smidge longer to refresh and load new conversations, scrolling through long articles was a smidge more stuttery and less smooth. The smidges weren’t the end of the world, but since I was using the Folio all day as my primary driver, they added up. My experience editing a big batch of pictures in the Windows Photos app was annoyingly slow — the program actually crashed at one point, which I’ve never seen Photos do before.

So what’s the benefit of an Arm chip, if not snappy performance? They allow for thinner chassis and are easy to integrate with LTE — but the primary benefit is supposed to be battery life. We’ve seen this in Arm-based Chromebooks, which have delivered over 10 hours in our testing, and in Apple’s M1-powered MacBooks, which have the best battery life of any MacBooks in recent memory. So I dove into the Folio with big expectations.

Unfortunately, this device’s battery life, while good, is not astonishing. Using it as my primary driver with the screen at medium brightness, I averaged eight hours and 15 minutes. To be clear, that’s not a bad result at all. But there are all kinds of Intel convertibles that perform better, last longer, and are cheaper. I easily get 10 hours with that same workload out of HP’s Spectre x360 14, and close to nine out of the Dell XPS 13 2-in-1. The Folio is also a case where different workloads may yield very different results, however, since emulated apps will likely consume more power.

I’ve been looking for a portable, durable secondary device that I could use to get some work done or watch a movie or two on weekend trips. I wish the Elite Folio were half its price, because then it would be perfect for that use case, and I’d be snatching it up.

But I’m a fairly traditional business user, and Elite Folio still doesn’t have enough processing power to be my primary driver. And there are too many apps I use, including Premiere Pro, Dropbox, and a number of games, that I’d have to give up (for now, at least). That’s too big of a sacrifice to make, even for a beautiful and unique chassis.

That doesn’t mean the Elite Folio is a bad laptop. It could be a great choice for people with light day-to-day tasks who are mostly working in a few tabs at a time, or who do a lot of drawing and note-taking on the move and would use the easel form. Folks who value style and presentation over other characteristics should also give it a look. It’s a gorgeous product to hold and play around with. If I got it for free, I’d bring it everywhere I went.

But if you’re considering buying the Folio, you should try the device yourself if you can or (and I know I’m biased here) read a bunch of reviews before you do so. Just make sure you won’t be caught off-guard by the slower performance, and that any apps you use can work as you need them to. Otherwise, you’re looking at a lot of wasted money.