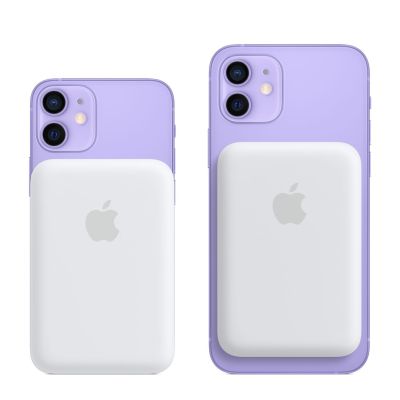 The addition of MagSafe to the iPhone 12 line introduced all manner of fun avenues for accessory makers, but there’s a strong case (so to speak) to be made that a snap on battery pack might be the most useful of all. A number of third-parties (notably Anker and Mophie) have introduced their own versions, and now Apple’s getting in on the action.

The simply-named MagSafe Battery Pack went up for pre-order on Apple’s site today for $99, with an estimated arrival of July 19. The new pack comes in white (with a subtly gray Apple logo on the back to let people know you went first-party) and provides up to 15W of wireless charging, per the company.

Other details are scarce at the moment, including mAh size and precisely how many phone charges you’ll get out of the pack. The pack itself charges via Lightning port, and users can plug it in with the phone attached to get a quicker charge to both the pack and battery at once.

The price is a premium, compared to Anker and Mophie’s products, which run around the $45-50 range for a 5,000mAh battery.