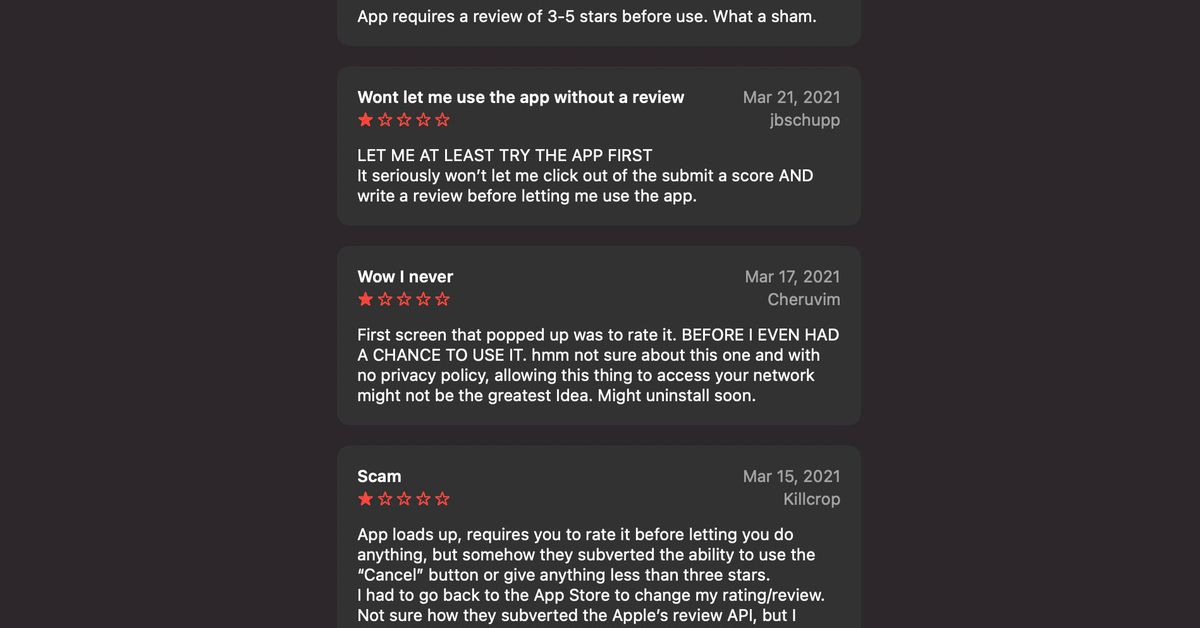 App developer and scam app hunter Kosta Eleftheriou’s latest discovery is a real doozy, an iOS app that refuses to function before you give it at least a 3-star review in the App Store. Although the UPNP Xtreme app — which claimed to let users stream video to their TVs — now appears to have been pulled, we were able to verify that it generates the App Store rating box the second it opens. You can’t dismiss the ratings box, nor can you tap the 1 or 2-star ratings, Eleftheriou said. We verified this behavior, but some other users report they were able to dismiss the dialog box or leave a lower rating.

This is just the latest scammy app to have been unearthed by Elefheriou, who’s been waging a war against them after his own Apple Watch keyboard app, FlickType, was overtaken by expensive apps with fake reviews. Eleftheriou says Apple has removed over 100 apps as a result of his reports, but it’s concerning that the multi-billion dollar company isn’t catching these scams during its App Store review process.

If you think you can trust App Store ratings, you haven’t been paying enough attention.

This is the iOS *system* rating prompt, not a custom look-alike one.

The worst part? This trick is EXTREMELY easy for any developer to do, and not limited to this app.

The UPNP Xtreme app’s behavior directly contradicts one of the best practices Apple lists on its developer site, which states that developers should “avoid showing a request for a review immediately when a user launches your app.” Generally, developers are allowed to prompt for a rating up to there times in a 365-day period.

Apple’s review process has been under particularly intense scrutiny recently because of Epic Games’ lawsuit against the company. Central to the dispute is the 30 percent commission Apple takes on many App Store payments and in-app purchases. Apple argues it needs the commission to run the App Store and create a safe environment for users. But that argument gets undermined pretty quickly if obvious scammy apps are able to slip through Apple’s review process.

Apps like the ones discovered by Eleftheriou not only harm customers who end up downloading scammy software and can get tricked into paying for difficult-to-cancel recurring subscriptions. It also harms legitimate developers who have to contend with apps that are willing to play dirty to get the good reviews needed to rise up the App Store’s rankings.

Eleftheriou filed a lawsuit against Apple earlier this year, arguing it exploits its monopoly power over iOS app to make money at the expense of app developers and consumers.

How to use transitions to make your TikTok videos more interesting