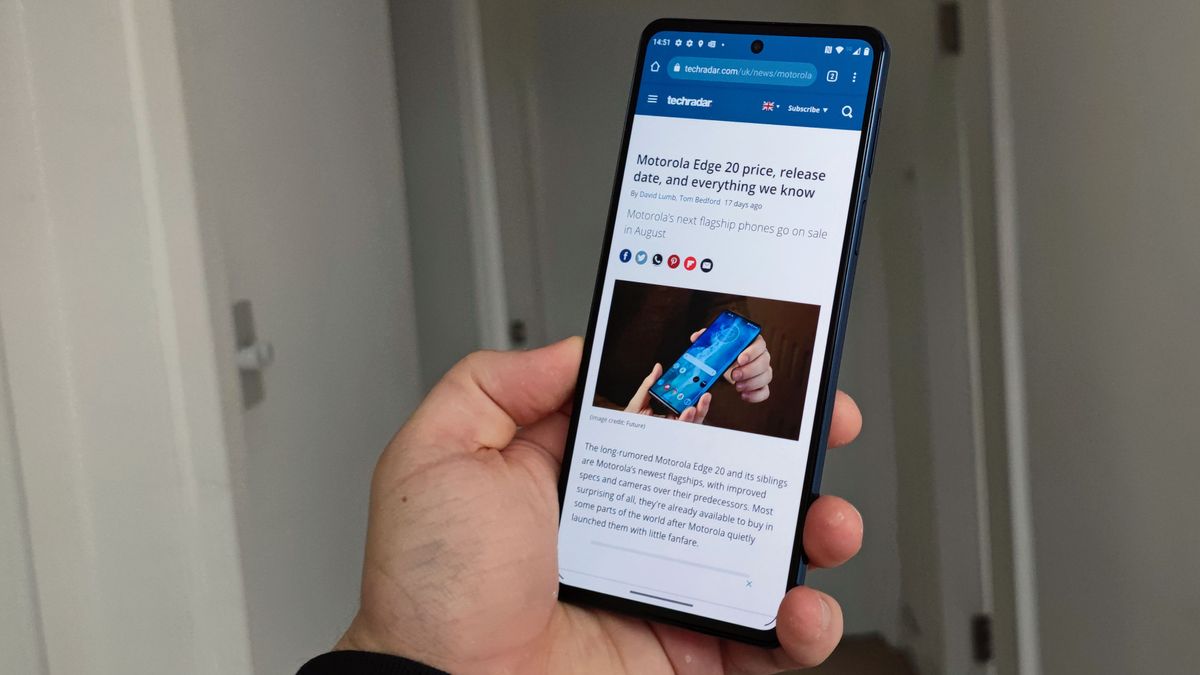 When the Motorola Edge debuted in mid-2020, the edges of its display curved in an elegant and dramatic fashion, leading us to believe these edges were what the name was referring to. However the Edge 20 series doesn’t have this curve, leading us to wonder what that name is about. Well, Motorola has elaborated.

In a comment to TechRadar, Motorola explained the logic behind the Edge 20 series naming scheme, including why the phones don’t have tapered screens and why there’s a Pro and Lite this year (last year there was the standard and Plus models).

Apparently, the Motorola Edge phones are about top specs, whether or not that includes curvy screens: “Motorola edge and motorola edge+ were meant to offer all the bells and whistles for people who wanted more. We wanted to stand out with the first generation of motorola edge, which is why we opted for a head-turning feature like the curved screen.”

But that’s different with this second generation of phones: “Now we’ve established the franchise and decided to re-invest the cost of the curved screen into other experiences like zoom cameras, higher refresh rates, and designing one of thinnest and lightest phones on the market, which consumers tell us they prioritize over the uniqueness of the curved screen.”

So in other words, consumers don’t care enough about curved-edge screens for them to be a priority. We’ve heard this before, like when Xiaomi told us it found 60% of consumers wanted flat-edge screens, which is why it used one in the Xiaomi Mi 10T.

We’ve tested the Motorola Edge 20 Pro, and found it offered more than many other Moto phones in the screen and camera department. We did find ourselves wishing for the curved-edge display, though, as it’d save the otherwise-poor hand-feel of the phone.

This isn’t the Edge 2, but Edge 20 series, and according to Motorola “understanding where other premium devices are at in naming, we went with 20 so our devices are more in line with the industry at large”.

That makes sense: if you’re looking at a shop shelf and see the ‘Edge 2’ alongside the Samsung Galaxy S21, Xiaomi Mi 11, iPhone 12 and Huawei P50, you’re probably not going to opt for the only single-figure device. It lacks the gravitas of its double-digital rivals.

The changed naming pattern was also addressed – Moto told us “We adjusted the naming of this franchise since we have three phones this year instead of two, and since the price range is a bit different.”.

It’s very possible that buyers would see an ‘Edge 20 Plus’ and assume it was similar in price to the original Edge Plus, so that subtle change to Pro could cause potential customers to check again.

There was a bit of confusion when the Motorola Edge 20 series debuted without the Edge, with an extra phone, and at slightly different price points than the original duo. But it sounds like the company is just working in a different way than we assumed.