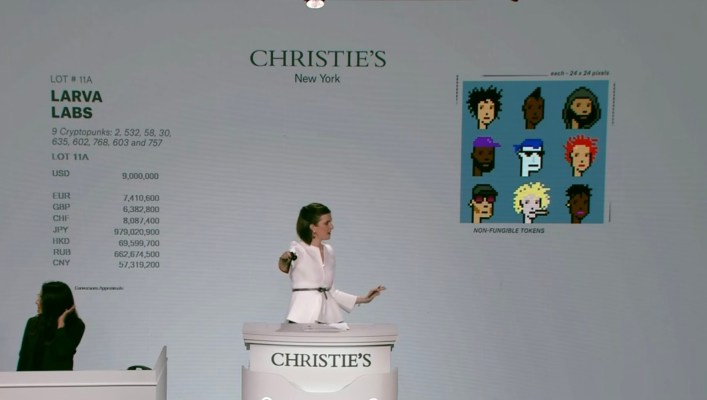 A lot of 9 CryptoPunks portraits ended up selling for just under $17 million in a Christie’s auction Tuesday evening, marking another substantial moment for NFT art sales. The lot of pixelated portraits were from the collection of the NFT platform’s co-creators Matt Hall and John Watkinson.

The CryptoPunks platform is one of the first NFT projects on the Ethereum blockchain. Back in 2017, ten thousand of the procedurally generated characters were given away for free. In the years since, a vibrant NFT community has developed around the ‘Punks. In recent months, on the back of a broader NFT boom, prices exploded.

Last month, TechCrunch profiled the community and some of its buyers who have paid tens and hundreds of thousands of dollars each to join the exclusive club of CryptoPunks owners.

Tuesday’s sale marks a substantial payday for the creators of the project, but comes just days after a much more substantial one: the release of their new project called Meebits which garnered nearly $80 million in sales in just a few hours.

Many had expected the sale to reach an even higher premium in recent weeks, something that had led to a substantial run-up in prices of CryptoPunks in the weeks ahead of the auction. Though the lot sold for a significantly higher dollar amount, when priced in denominations of the surging Ethereum cryptocurrency, the entire bundle sold for slightly less than the sale price of the last alien figure, which sold in March for 4,200 Eth just hours ahead of Beeple’s $69 million NFT sale.