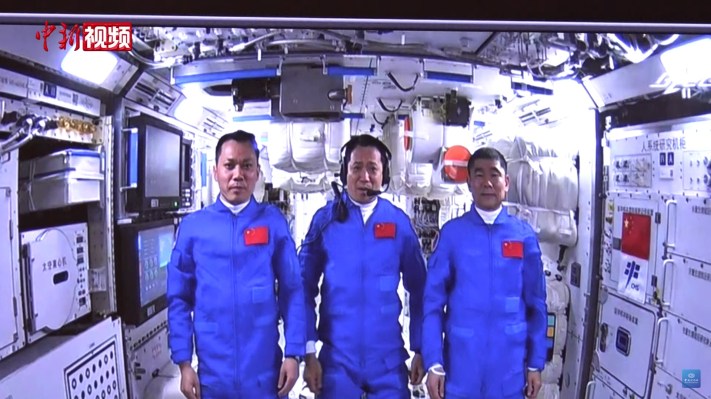 The three astronauts flew to space as part of the Shenzhou 12 mission, China’s first crewed mission since 2012. They will call the core module of the Tiangong space station home until September, making it the longest crewed space mission in China’s history.

The three men, Commander Nie Haisheng, Liu Boming and Tang Hongbo, arrived to their final destination just over seven hours after taking off from Jiuquan Satellite Launch Center in northwest China. Nie had been to low Earth orbit twice before: once on the Shenzhou 6 mission in 2005 and again aboard the Shenzhou 10 eight years later. Boming has also been to space, once in 2008.

The men will be busy during their tenure in orbit. Their mission marks the third of a series of eleven planned launches through 2022, all aimed at getting China’s first space station up and running. The goal of the Shenzhou 12 is to bring the core module into service, test its systems and ensure it is ready for subsequent stages of station assembly. Of the eight remaining launches, three more are expected to be crewed.

Building its own space station is a logical step for China, a country that has not been shy about its space ambitions in the recent years. It especially makes sense considering that China is barred from boarding the International Space Station after Congress passed a law in 2011. However, that does not mean that China’s space station will always be for its own exclusive use, country officials said during a news conference Wednesday.

Ji Qiming, an assistant director with the Shenzhou program, said that China “welcome[s] co-operation in this regard in general,” the BBC reported. “It is believed that, in the near future, after the completion of the Chinese space station, we will see Chinese and foreign astronauts fly and work together,” he said.

As part of its burgeoning space program, the Chinese rover Zhurong touched down on Mars last month, making China the only country besides the United States to land a robot on the planet.