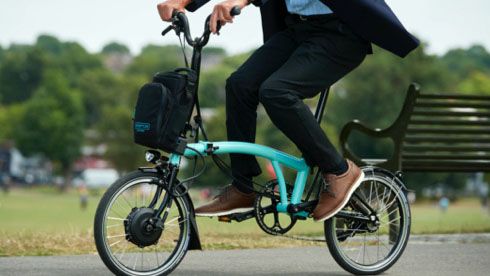 Brompton has recalled thousands of folding e-bikes after discovering a firmware problem that could lead to a systems failure. The motor on a Brompton e-bike usually only kicks while you’re pedaling, but the software fault means it could keep running even after you stop.

The problem is rare (only one incident has actually been reported, and there have been no crashes), but Brompton is playing it safe by issuing free emergency firmware updates for all bikes that were either made, or had a firmware update from a Brompton retailer between May 1, 2020 and March 1, 2021.

If you own a bike made or updated in that period, pay a visit to Brompton’s recall page and use the serial number checker to see whether it’s affected. The process is explained in the video below.

You can’t update your e-bike yourself; instead, you’ll need to find an official Brompton Electric dealer who can carry it out free before September 1, 2021.

That could be inconvenient if you don’t have a dealer within easy reach, so Brompton is offering a voucher worth £20 (about $28) if you live in the UK and Northern Ireland, France, Germany, USA, Belgium, Spain, Netherlands, Portugal, Republic of Ireland, Denmark, and Sweden.

Brompton confirmed to Which that 7,262 bikes were affected, and 3,997 have already been updated to make them safe.

Electric bikes aren’t much harder to look after than a conventional bike, but as this firmware fault shows, there are some extra factors to bear in mind. Julian Thrasher, head of training at Shimano, told TechRadar that it’s worth getting your e-bike serviced at an authorized workshop once or twice a year. Here, your bike will be checked for mechanical and electrical issues, plus any system updates.

“They ensure that any bugs in the system that [the developers] have found are taken out, that all the components speak effectively together, and sometimes there can be little upgrades,” Thrasher said. “Basically there’ll be features that come out that the new firmware accommodates. So it’s a really good virtual upgrade.”

This is the case with Brompton’s latest firmware update, which not only fixes the safety bug, it also adds BLE (Bluetooth Low Energy) functionality, which will work with the company’s new e-bike app.

“People don’t need to be scared that you need to be taking the bike in every five days to be looked at,” Thrasher says. “They’re pretty robust, so the main thing is the firmware, to take it in and to just get it checked over to make sure there’s nothing that you may not have seen that a professional bike shop could see.”

Toyota partners with ENEOS to explore a hydrogen-powered Woven City