It’s easy to be underwhelmed by the new Apple TV 4K. It looks identical to Apple’s first 4K streaming box introduced back in 2017, and the day-to-day experience of using it doesn’t feel dramatically better when compared to that device. The biggest improvement is undoubtedly the redesigned second-generation Siri Remote that comes bundled with the new Apple TV 4K — but you can buy that separately for $59.

Those who have long sung the Apple TV’s praises will find more to like with this updated hardware. It now has Wi-Fi 6 for speedier, more robust wireless performance. (A gigabit ethernet jack remains on the back for wired connectivity.) Apple has also built in support for Thread, the smart home networking protocol that will eventually be widely supported across the industry — even if it’s good for relatively little right now. The biggest internal change in the latest model is an upgraded chipset: Apple has moved on from the A10X Fusion to the A12 Bionic. But the A12 is far from Apple’s latest and greatest silicon; it first appeared in the iPhone XS line in 2018 and is still currently used in the entry-level iPad and iPad Mini. It’s an improvement, but not some game-changer for Apple’s set-top box. 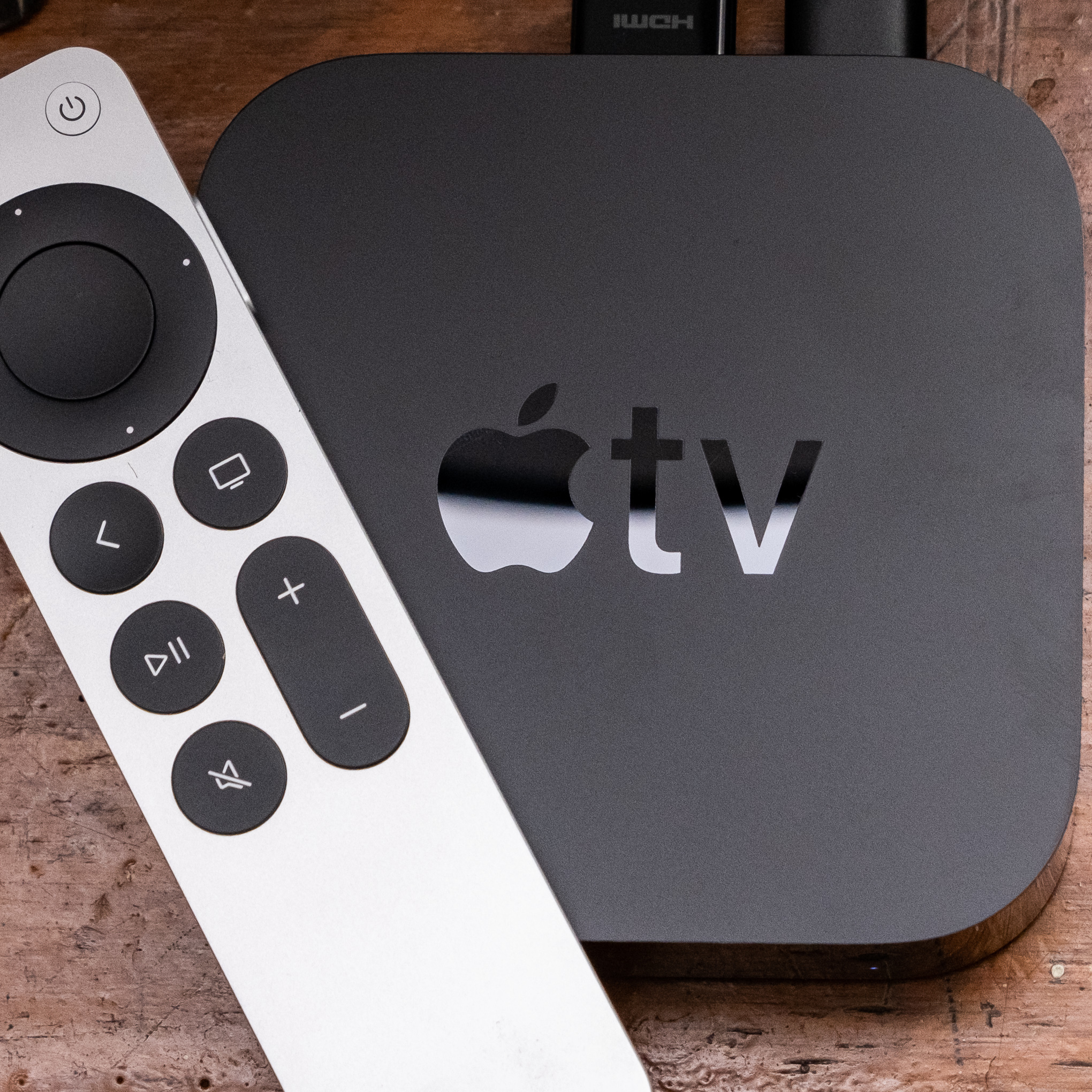 On the outside, the Apple TV 4K is impossible to distinguish from its predecessor. It’s still the same nondescript black box that calls little attention to itself on a TV stand. I wish Apple would have done away with the glossy, dust-magnet sides, but we’re not so lucky. The company is sticking with the traditional set-top box form factor even as many competitors have moved to more discreet HDMI dongles that are usually hidden from view behind the TV.

There have also been more subtle technical improvements that aren’t being advertised, but it’s the type of stuff video nerds will notice. Apple has mostly resolved an issue with raised blacks in Dolby Vision content, according to HDTVTest’s Vincent Teoh. However, the 2021 Apple TV 4K still doesn’t support bitstream audio passthrough, so the company hasn’t addressed all the wants of home theater enthusiasts. But it’s still checking off the essentials like Dolby Vision, Atmos, and HDR10.

The tvOS software experience is identical between this Apple TV 4K and its predecessor. Navigating through menus and Siri voice searches both come with an extra dash of speed, and apps seem to load faster than before. But the differences are often marginal; the 2017 Apple TV 4K still holds up well today in terms of performance. That’s largely because tvOS is very polished at this point, and it doesn’t cheapen the viewing experience with in-your-face ads or sponsored content.

The Apple TV’s home screen is still the same old static grid of apps, and Apple does what it can to steer you into using its Apple TV app, which aggregates TV shows and movies from numerous services and is also where you’ll find Apple TV Plus originals. Ted Lasso is coming back soon, in case Apple hasn’t hammered that message into your brain enough already. The Apple TV app is fine and more than competent at recommendations (provided you aren’t looking for anything from Netflix), but aside from the Apple TV Plus section, it hasn’t changed a whole lot and feels stuck in place.

Thankfully, Apple has evolved and added to tvOS elsewhere in recent years with new features like multiuser support, Apple Fitness Plus, and HomePod home theater audio. Speaking of which, the new Apple TV 4K lets you play audio through any HDMI device through the original HomePod. I don’t have Apple’s speakers around to try this myself, but early reports suggest that ARC audio works fine for video content. However, latency might be a dealbreaker if you attempt gaming with HomePods as speakers.

Another new trick of tvOS that’s also available on older Apple TV devices is an automatic calibration feature that uses your iPhone’s camera to process color patterns on-screen and adjust the image to make it look as good as possible. This doesn’t actually alter any of your TV’s settings; the Apple TV is optimizing its own picture settings, and you can toggle between this calibrated “balanced” result and the default to see the difference. The consensus seems to be that Apple’s feature can lead to improvements — often producing a warmer image — though most higher-end TVs come with accurate settings out of the box, especially in cinema or calibrated mode. If you’re serious about picture quality, it’s worth doing a legitimate calibration to get the best outcome across all of your TV’s various inputs.

As before, the second-gen Apple TV 4K can serve as a hub for your HomeKit accessories; having a hub lets you control those devices remotely when you’re out of the house. When you are home, you can quickly access smart home gadgets or pull up camera feeds on-screen with a voice command on the Apple TV 4K. Apple has also included Thread, a wireless communication standard developed specifically for smart home purposes, in the new Apple TV 4K, allowing it to be a hub for Thread devices to connect to and access the internet through. Thread should lead to more reliable connections and faster response times between devices that support the protocol; Apple also built it into the HomePod Mini, and it’s the basis of the forthcoming multiplatform Matter standard. But other tricks that were once selling points of the Apple TV, like AirPlay, can now be found on many smart TVs and even Roku devices.

Video streams on the Apple TV 4K still deliver exceptional quality, but some of the frustrations we mentioned nearly four years ago still remain present in tvOS today. Apple has long enabled the box to match the dynamic range and frame rate of playing content, but not all apps have taken advantage of this feature. So if your preference in video settings is Dolby Vision with dynamic range matching enabled, you’ll still encounter some situations where SDR content looks unappealing due to forced HDR processing. (There’s also a strange bug on the new Apple TV 4K where some movies are being labeled as “HD” — even when it’s very clear that a 4K file is being streamed.) Setting tvOS to SDR by default with matching enabled leads to the best outcome, though YouTube annoyingly doesn’t flip over to HDR if you do this.

Live TV integration with Siri remains limited to a frustratingly small list of providers and apps, though at least ESPN is there. I’d love to see tvOS offer deeper support for live TV apps like Sling TV, YouTube TV, and Hulu with Live TV beyond including them in single sign-in.

One argument that Apple TV owners frequently make in support of the hardware’s premium cost is that they appreciate Apple’s stringent privacy policies. The new App Tracking Transparency feature recently introduced on iOS is also present in tvOS. And let me tell you, the number of apps that ask for tracking privileges is quite eye-opening. It feels like on this platform more than any other, I’ve been bombarded with the pop-up asking me whether an app has permission to track me across other apps and websites.

Here’s just a sampling of streaming apps that have shown it so far:

In my experience, Apple doesn’t sync up your chosen preference between iOS and tvOS when it comes to ATT. I’m getting the prompts again for all these streaming apps after already having seen them on my iPhone. It’s almost like Apple wants to emphasize how common tracking and data sharing has become among popular streaming services.

The new Apple TV 4K has been outfitted with an HDMI 2.1 port, but it’s fair to say that Apple isn’t leveraging the full potential of that upgrade. If you’ve been following the next-gen console hype over the last year, you know that the latest Xbox consoles and PlayStation 5 are capable of high frame rates up to 120fps. The Apple TV 4K, meanwhile, tops out at 60fps HDR. Apple still considers this “high frame rate,” and it does lend a noticeable fluidity to sports, nature documentaries, and other videos that were originally shot at higher frame rates. (YouTube now supports 60fps on Apple TV 4K as well.)

However, that 60fps ceiling is a bummer for games on the platform. No one’s realistically expecting the Apple TV 4K to square off against the latest home consoles or come anywhere close, but 120Hz can still make a difference in responsiveness for titles with simpler graphics. On the subject of games, it’s worth noting that the new Siri Remote can’t be used as a controller like the previous one could; you’ve got to use a third-party gamepad now. The latest Xbox and PlayStation controllers are supported (with haptics included), and tvOS also works with a wide mix of others. It’s overall an improvement if you really want to play games on an Apple TV.

I covered the new Siri Remote in its own review, but since it comes bundled with the Apple TV 4K, here’s a summary: it’s very, very good. The larger, thicker design is easier to handle (and more difficult to lose), and the circular D-pad will prove more intuitive for a lot of the people who were perplexed by the trackpad on the old remote. The center button still lets you navigate in the same way by nudging your thumb around, but if you liked the large gesture area on the original Siri Remote, this one might feel more limiting. On the whole, I think Apple absolutely made the right move in changing up the design. It’s dramatically simpler to use.

One feature I continue to wish the Apple TV 4K offered is spatial audio for AirPods owners. Being able to have a private bubble of surround sound when watching the biggest screen in your home seems like it could be a visceral experience. I know there are technical challenges and the Apple TV doesn’t have the same sensors as an iPhone or iPad, but I’m hopeful Apple will bring spatial audio to the platform at some point.

If you have the original Apple TV 4K, there’s really no sensible reason to upgrade to the new one. Wi-Fi 6 is nice to have, and Thread might prove important to the smart home someday, but that time isn’t now. Otherwise, you’re getting a slightly faster experience than what the old box is capable of. Just buy the Siri Remote, and call it a day.

But if you’re coming from something older or the wildly overpriced Apple TV HD, the proposition is the same as always: you can get a very good 4K streaming gadget for a fraction of the Apple TV 4K’s price. But it’s unlikely to offer the same user experience or reliable performance. Or maybe some apps won’t support Dolby Vision or Atmos to the same degree they do on Apple TV. The Apple TV 4K is still overpriced, but it’s also still arguably the best streaming experience you’ll find in a single box — especially if you’re entrenched in Apple’s ecosystem. Does this new hardware feel like a true upgrade or big leap from the 2017 Apple TV 4K? No, not really. But at least they got the remote right.

Photography by Chris Welch / The Verge