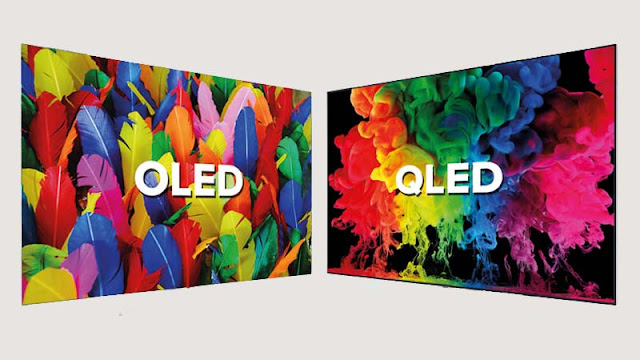 Since we’ve been talking about TVs, there’s been an ongoing debate in the commentary. It’s about screen technologies and whether OLED or QLED is best for a TV experience.

Today, we will try to highlight the advantages and disadvantages of these two technologies, to put the emphasis on dismantling preconceived ideas and to awaken your curiosity about the real added value that each has to offer.

The QLED, originally, is nothing but a brand, and no, it is not “Samsung’s OLED”. This trademark was registered by the Korean to succeed the “SUHD” and to dust off a relatively old technology that had to be updated with the arrival of the first OLED televisions.

So we’re talking about QLED at Samsung, but also Triluminos at Sony or Nanocell at LG. Behind these 3 names hide LCD TVs that use the Quantum Dot. Quantum Dot technology is used to improve the backlighting systems of TVs by catching up with their color drift. LED backlighting today is based on blue diodes, covered with a phosphorescent substance that allows white to be displayed more or less well. The addition of a Quantum Dot filter, thanks to the quantum properties of the nanoparticles it contains, makes it possible to add green and red to the backlight spectrum to obtain a whiter white and therefore a better controlled and more extensive colorimetry.

Like all LCD TVs, QLED TVs require backlighting to operate. The latter is “Full LED” on high-end LCD models, i.e. it diffuses its light over the entire panel and incorporates what is known as local dimming, an algorithm that partitions the backlight into several zones. This allows the backlight to be managed locally and to switch off completely in certain areas of the image to provide almost absolute blackness.

The higher the number of zones, the better the contrast. The big advantage of the QLED is obviously its ability to display very bright images thanks to its backlighting without affecting the life of the product.

OLED is a fairly young technology for the general public. The difference between an OLED TV and an LCD TV is that OLED does not need backlighting to work. Each pixel emits its own light and can therefore turn on and off independently of the others and produce unparalleled contrast. The blacks are abyssal and this prevents light leakage and other disappointments associated with LCD backlights.

In addition, since no backlighting is required, OLED panels are thinner than a smartphone and their energy consumption is also reduced. Today, LG Display is the only company to manufacture OLED panels and supplies Sony, Panasonic and Philips to name a few of its major partners. However, it is a mistake to think that the picture quality is the same because they share the same panel, as they each have their own image processing to promote.

What we’re most interested in is how these two technologies behave. Indeed, televisions are often subject to many setbacks when it comes to performance.

Advantage to the OLED

When it comes to slab responsiveness, OLED technology takes the lead over LCD. Indeed, the response time of an OLED panel is almost zero, we speak of 0.05 ms response time, which means that the image is displayed clearly in all circumstances.

The QLED is not to be outdone!

If OLED technology wins the battle of response time with flying colours, Samsung TVs are not left out in the field of input lag. For example, the latest Samsung QLED TVs have a display delay of only 10 ms in 4K/HDR at 60 Hz. In addition, the Korean manufacturer offers an image interpolation mode dedicated to the game mode allowing to artificially fluidify the action while keeping an input lag lower than many of its competitors. A small feat in short, which allows you to enjoy its games in 30 fps with a greatly improved fluidity without feeling a too high decay. The result on solo games that are not very demanding in terms of reactivity is excellent.

Image quality and HDR: each to its own!

When it comes to image quality, there are certain differences between the many brands. Image processing, for example, is a bit like the signature of a manufacturer and each one has its own approach. A rather subjective affair, some will prefer a very demonstrative image while others will only do tricks and will thus privilege fidelity.

As time goes by, we also see the arrival of new features such as HDR and on this subject, our two display technologies present marked differences.

The demonstration of the QLED…

Thanks to the support of backlighting, QLED televisions offer a dynamic and very bright picture. In addition, Samsung’s treatments are very “aggressive” when it comes to accentuating the depth and sharpness of a scene.

For HDR, backlighting allows you to achieve stunning light peaks without having to sacrifice the overall brightness required to maintain the dynamic image. While the technology doesn’t do as well in dark scenes as OLED, it does manage to give daytime scenes a fairly remarkable richness with beautiful nuances in the highlights.

… against the accuracy of OLED

On the other hand, the OLED excels when we are in dark scenes. Due to the self-emissive nature of its small organic diodes, it is possible to provide complete black and keep only a small lantern at full power on the neighboring pixel. All this without light leakage, with an unequalled precision.

Light scenes, on the other hand, are less demonstrative because the OLED is limited in light. To maintain the dynamics of a scene in HDR, the TV will reduce the overall brightness  because it can only display at full power a small portion of the image.

This is surely the most debated point and for good reason, everything opposes these two technologies on this subject. The question of lifespan is indeed an important element, not only as a player but above all as a consumer. When we buy a television set, we generally want it to last as long as possible, and we have to look at the investment in time we make in it.

As far as QLED is concerned, there is no real risk over the lifetime of the product. LCD is a technology that is not only proven, it is also mastered by everyone and on this issue, it has an indisputable advantage over OLED.

The issue of marking is the number one argument of those defending LCD TVs tooth and nail and for good reason, OLED, like Plasma in its day, is indeed subject to marking. That is, an image, if displayed statically at high brightness and over a long period of time, can “burn” the slab. This burn is generally irreversible, so a black print may be visible in some cases and interfere with your viewing experience.

Fortunately, the problem of marking is well known to the brands and they all propose measures to reduce the risk. LG Display, the sole supplier of OLED panels, offers quick panel maintenance when the TV is switched off and extended maintenance of up to 80 minutes throughout the life of the product.

In addition, other solutions, such as logo attenuation options and, most importantly, pixel displacement, can now drastically reduce the risk of marking appearing. This is achieved by shifting the image by a few pixels at regular intervals so that nothing remains static. For the viewer it is imperceptible.

No risk 0, but progress!

If marking is an inherent problem with OLED technology, the latter is still very young for the general public and is evolving at a remarkable speed. Today, the latest OLED TVs are much less prone to marking than the first LG OLED 4Ks released in 2016 for example. If there is no such thing as a 0 risk, and we insist on this, by buying with full knowledge of the facts and using the product responsibly, you should not be bothered with marking on the latest models.

With this information in mind, you should be able to find your way around more clearly in front of the multitude of references flooding the market. If there are notable differences with undeniable advantages and disadvantages on both sides, once again, the search for a product that first and foremost meets your needs is paramount. The arrival of next-generation consoles such as the Xbox Series X and PlayStation 5 will also be an opportunity to push brands to adopt HDMI 2.1. LG since 2019 and Samsung this year are the two main manufacturers to propsoer HDMI 2.1 on their 4K HDR products and this is another fact that should not be overlooked when considering the renewal of your equipment.