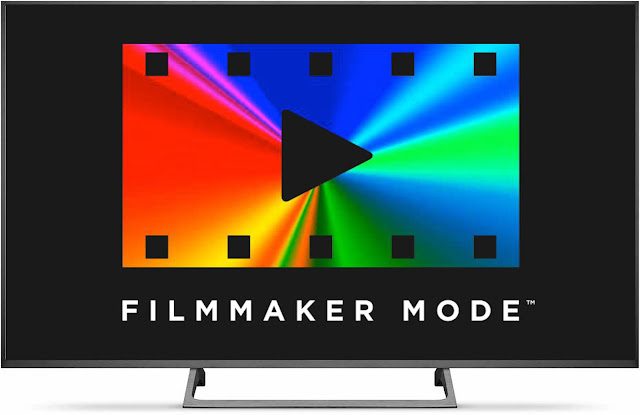 The Filmmaker Mode is a new picture preset for the majority of 4K Ultra HD TVs on the market.

Designed to preserve the creative intent of filmmakers, Filmmaker Mode promises viewers an authentic movie experience on their 4K TV. It guarantees that they will be able to enjoy movies in ideal conditions with the image that the director and his technical team wanted. Filmmaker Mode is the result of a partnership between leading television manufacturers, the UHD Alliance, and Hollywood film studios.

All 4K UHD televisions on the market offer a picture adjustment menu that allows you to adjust many parameters: brightness, contrast, temperature, and color saturation, or motion compensation. These TVs also offer several picture presets calibrated for different types of content: Cinema mode, Games mode, Sport mode, etc.
However, as Carlos Angulo (product marketing director at the American TV manufacturer Vizio) acknowledged when launching the Filmmaker Mode standard, 85% of TV owners never go through the adjustment box. They settle for the original settings, either out of ignorance or because it seems complicated, and thus deprive themselves of the best possible picture quality to watch their favorite films.
The new Filmmaker Mode standard was born out of this observation and aims to remedy this by standardizing and automating the image settings, which will be adapted for each film labeled Filmmaker Mode.

The Filmmaker mode is designed to simplify things for the user, who can sometimes feel lost when faced with the diversity of settings and technologies offered by the latest generation of televisions. The calibration of an OLED TV, a 4K UHD TV, or a QLED TV to obtain a “cinema” picture is indeed not so simple and requires some technical knowledge that not everyone necessarily has.
The Filmmaker mode removes the need to dive into the TV’s setup menus. When a film is labeled Filmmaker Mode, it incorporates several pieces of information about the optimal picture setting into the video stream in the form of metadata that is detected and read by the compatible 4K Ultra HD TV. The TV will then automatically switch to Filmmaker Mode with the director’s preferred picture settings for the film. The images of films labeled Filmmaker Mode seen by viewers in this mode thus correspond as closely as possible to the images calibrated by the filmmakers in the mastering studios.
Among the various TV manufacturers involved, Panasonic has already announced the integration of the Filmmaker Mode into its flagship TV sets as of 2020. As the Filmmaker Mode is standardized, it will be applied in the same way on all TVs equipped with it, to ensure that viewers will have the same experience regardless of the brand and model of their TV.

The Filmmaker mode is reminiscent of the preset picture modes called “Cinema”, “True Cinema” or “Film” already present on most 4K UHD TVs on the market. However, these modes, which disable most video processing and offer a “cinema” type image calibration, are developed by each manufacturer without necessarily meeting a common standard. The result on the screen may therefore be significantly different on several competing brands of TVs broadcasting the same film and each set to their cinema mode. In addition, each TV’s “Cinema” mode always applies the same setting values regardless of the film being broadcast.
By imposing common specific standards, the Filmmaker mode makes it possible to standardize the rendering on TVs of different brands. In addition, by inserting metadata into the broadcast video stream, Filmmaker Mode allows the UHD 4K TV to automatically adapt and individualize the picture settings for each movie, based on the director’s recommendations.

OLED vs QLED: which are the best TVs for gaming, sports or movies?

How to choose the right TV set?