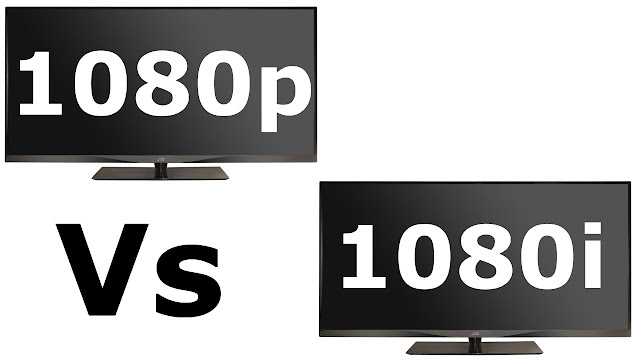 1080i vs 1080p are display methods with advantages and disadvantages, although the resolution is the same, and the picture quality is uneven.

The high-definition image format is characterized by a resolution of 1920 pixels in width and 1080 pixels in height. This HD resolution can be displayed in two different ways: interlaced display (1080i) and progressive display (1080p). So what should you choose between 1080i vs 1080p? Here’s a more detailed look at how these two HD resolutions work.

Both the 1080p and 1080i systems are HD certified and are therefore capable of displaying images of 1920 x 1080 pixels. The difference between these two resolutions is in the picture display mode. The letters “i” and “p” refer to the display mode used. For example, 1080i refers to “interlaced” and 1080p refers to “progressive scan”.
The 1080i implements an interlaced display, while the 1080p has a progressive scan display.

1080i interlaced display means that each image is displayed twice. This is the display mode of older CRT televisions. This display technique was developed to double the number of pictures perceived per second and improve the contrast of low scan rate TVs. This is because when the electron beam scanned the screen on older CRTs, there was a long time lapse between the display of the first pixel at the top of the screen and the last pixel at the bottom of the screen. This resulted in a difference in brightness between the bottom and top of the TV and thus a noticeable difference in contrast. The interlaced display was thus born to display fewer lines at a time and thus ensure greater visual comfort. To do this, each picture is split into two frames: a first frame containing the odd lines of the picture, then a second frame containing the even lines. Each displayed frame thus corresponds to half of the lines of an image. At a scanning frequency of 50 Hz, half a picture per scan is obtained, i.e. 25 frames per second. This system takes advantage of retinal persistence and the ability of the human brain to reconstruct the entire image.
As the scanning frequency of TV sets is no longer limited to 50 Hz, the interlaced format is no longer of interest. It is no longer used on all modern TV sets, be it LED TV, 4K UHD TV, OLED TV, 8K UHD TV, etc., and is no longer used on all modern TV sets. However, this format is still used for DTT. Why is this? Quite simply because this technology requires half the bandwidth and therefore a less greedy internet connection. In fact, although the full size of the program remains the same, the information broadcast at any given moment is half as small, since only half a picture is transmitted and not a full picture.

Like the 1080i format, the 1080p display has a resolution of 1920 pixels in width and 1080 pixels in height. However, its operating principle is different and consists of displaying the entire image at once. Each displayed frame therefore corresponds to a whole image. Progressive display is used today by all modern computer monitors and TV sets, whether LED TVs, 4K UHD TVs, OLED TVs, 8K UHD TVs, etc., or by any other type of TV.

Due to its operating principle, the 1080p display has many advantages over the 1080i format, starting with superior perceived picture quality. Indeed, even if the same image in 1080p and 1080i has the same resolution and therefore the same number of pixels vertically and horizontally, the vertical resolution of an interlaced image seems to be almost 60% lower. This is due to the fact that the even and odd lines of the image are not displayed at the same time. A 1080i video thus offers a picture quality very similar to a 720p file and therefore does not allow you to fully enjoy a Full HD picture.
Warning! As previously mentioned, DTT programs are broadcast in 1080i in order to optimize the bandwidth. A modern television set must therefore perform a deinterlacing process in order to reconstitute each original image from the two frames that make it up. If this deinterlacing work is not done properly, artifacts and step-like effects in the picture will result. The
advantage of having an internet or satellite TV set-top box and a Blu-ray or network audio-video player with progressive scan video output is obvious: the high-definition image that comes out of the player is ready to be displayed in progressive scan and is therefore not subject to any alteration.

OLED, QLED, LCD, Micro-LED, Mini-LED: what are the differences between screen technologies?